On December 19, 2016, China Science News published a feature article about the leading role of Kingsemi Co., Ltd. in the IC assembly industry in Liaoshen area. 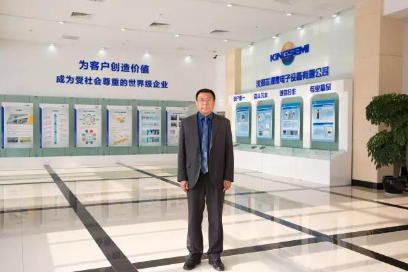 General Manager Zong Runfu
With over one patent per capita, it has rapidly grown into a first-class enterprise in the field of domestic integrated circuit (IC) equipment in more than ten years. Kingsemi Co., Ltd. (hereinafter referred to as Shenyang Xinyuan) has embarked on a development path driven by independent innovation.
In December 2002, the Shenyang Institute of Automation of the Chinese Academy of Sciences (hereinafter referred to as the Shenyang Institute of Automation) cooperated with the planning of the industrial park in Hunnan District of Shenyang City and initiated the creation of Shenyang Core Source. At the beginning of its establishment, the domestic IC equipment industry was immature and lacked an industrial supply chain and customers. Shenyang Xinyuan became one of the pioneers of the IC equipment industry in the Liaoshen area.
Recalling the original journey, Zong Runfu, general manager of Shenyang Xinyuan, lamented: "Pioneer often means risk, but we only act as a pioneer to avoid risk. It is the spirit and scientific research of Shenyang Institute of Automation that is" dedication, truth-seeking, collaboration, and innovation " The resilience of dedicated personnel has helped the company survive the initial difficulties and achieve today's performance step by step. "

Innovation finds a way out

Innovation is an important part of the spirit of the Shenyang Institute of Automation, and independent innovation and good products are the way for Shenyang Xinyuan to seek development.
Zong Runfu told the China Science News reporter: "Shenyang Xinyuan attaches great importance to innovation and research and spreads the seeds of innovation in the hearts of every employee." Shenyang Xinyuan currently has 210 employees and more than 270 patents. The leading product homogeneous developing equipment is widely used in light-emitting diode (LED), high-end packaging and other fields, and the domestic market share exceeds 40%. "This achievement comes from the investment in scientific research and development and the good atmosphere of independent innovation."
As an enterprise hatched from Shenyang Automation, technological innovation and tackling difficulties are the original genes of Shenyang Xinyuan. In the early days of the company's establishment, the IC equipment industry has always been dominated by foreign companies, and expensive prices have burdened domestic companies.
"Shenyang Xinyuan overcomes technical difficulties one by one. While upgrading the whole machine, it focuses on the localization of core components, which reduces product cost and service costs." Zong Runfu said, "The localization of equipment not only improves Shenyang core The competitiveness of the source has also reduced the cost of the customer, thereby increasing the competitiveness of the customer and the industry. In fact, it has driven the industry's processing capacity and played an exemplary role. "
Today, China's IC equipment industry has formed a three-legged situation in Beijing, Shanghai, and Shenyang. Among them, the development of Shenyang's IC equipment industry benefits from pioneering companies such as Shenyang Xinyuan.

上一页：Kingsemi was named as one of the top ten companies in China's semiconductor equipment industry in 2018 下一页：Kingsemi Co., Ltd. was selected as the first batch of
返回